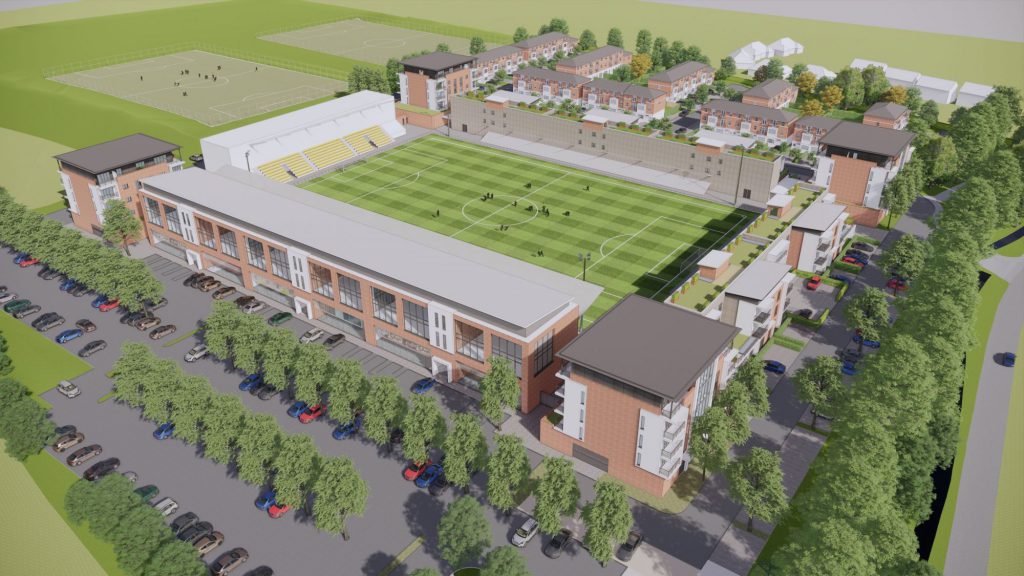 Hundreds of homes and a spectacular new football stadium will soon lay at the heart of a long-awaited new sports village at Cheshunt Football Club.

After eight years in the planning process the green light was finally given in September 2021 for Cheshunt Sports Village when the council’s refusal was overturned in a public inquiry.

The sports village will home Cheshunt FC with a newly built 2,000-capacity stadium, which has been designed to accommodate 5,000 spectators in the future to safeguard the club for the Football League. Alongside the new stadium, Cheshunt Sports Village will include 163 new homes and a range of new community, leisure, and business facilities.

The plans will see a major redevelopment of the club’s current Theobalds Lane site, which will safeguard the club’s future and offer new facilities for the wider community.

Giving Cheshunt FC a ‘viable future’ to succeed was the primary intention behind the much-anticipated development scheme being carried out LW Developments. Cheshunt Football Club is an award-winning community football club competing in step three of the football league pyramid.

Director of LW Developments Dean Williamson, who is responsible for the scheme, said: “The club is a vital community asset that makes an important contribution to the social well-being of the local community, encouraging participation in sport, combating obesity in Broxbourne and developing lives of a wide range of people of all ages and backgrounds.”

Dean, who is also the Chairman of Cheshunt FC, said: “I’m absolutely delighted that planning permission has been granted for Cheshunt Sports Village.

“It’s a significant milestone in the club’s long history and marks a significant step forward in bringing our vision to reality for what will be a vibrant community, leisure and business hub for the local area and the Borough of Broxbourne as a whole.”

The developer has pledged that the new football stadium will be beneficial for residents of Broxbourne by boosting the area’s employment rates and developing new education and community outreach programmes alongside the new community and business facilities.

Mr Williamson added: “The new facilities at Cheshunt Football Club will become a hub of local excellence in sports facilities, education and training, which would greatly enhance participation in sport within the local area.”

The plans also propose 163 private and affordable homes to be built in the new scheme with properties ranging from one bed apartments to four bed family homes.

A wide range of new sports, leisure and business facilities will also be available in the village for the wider community.

“Cheshunt Sports Village will meet the anticipated growth in the population over the next 15 years and stimulate the local economy through inward investment, job creation and increased secondary spend,” said Mr Williamson.

The next stage of the development process will see the club seek an agreement with the landowners Broxbourne Council and Hertfordshire County Council to determine how the scheme will be brought forward.

LW Developments believe that Cheshunt Sports Village will become an exciting new community, bringing enduring social and economic benefits to the town, as well as progressing Cheshunt Football Club up the football pyramid.